There is a saying – or more of a simple equation, really – going around online that states Diversity + Proximity = Conflict. Culturally and ethnically diverse groups living in the same area will inevitably lead to conflict between those groups. You don’t have to be a rocket scientist to see how this might be true, but there are still plenty of smart people who lie to themselves and pretend that diversity is our greatest strength. They seem to be dead set on repeating this mantra as the world around them burns because at least it feels good to pretend that everything is all right. Admitting that you have been lied to and that you believed those lies is not easy. And many people prefer coming up with ever more bizarre rationalizations just to keep their kumbaya world view intact. Despite all evidence to the contrary, they continue to say that we can all come together and ignore all differences. We can all «just get along».

The New Zealand shooting is the most recent example of the above mentioned saying. A 28 year old Australian shot up two mosques in Christchurch in New Zealand and the death toll is at the time of writing 50. What most obviously distinguishes this newest attack from similar ones before it – for example the 2011 Norway attacks committed by Anders Behring Breivik – is the memetic nature of how it was executed. Tarrant listened to several well known songs during his rampage, some of them already associated with internet culture, others which now will be tied to his acts and give rise to many memes in the coming weeks and months. In his manifesto he claimed that Candace Owens was the person that inspired him the most and that the game Spyro also influenced him in a violent direction. While in his car on the way to the mosque, Tarrant reminded people to «subscribe to PewDiePie» at the beginning of his livestream. During his first court appearance he gave the «white supremacist» OK hand symbol and some outlets seem to believe that this gesture is to be taken 100% seriously. This is a type of attack that we haven’t seen before. It is adapted to the memes of the internet and apparently meant to create new ones. And that it will.

The songs he listened while livestreaming the attack are linked to below. I have also added some of the comments from the videos (except from the Serbia Strong/Remove Kebab video where the uploader has deactivated the comment section). 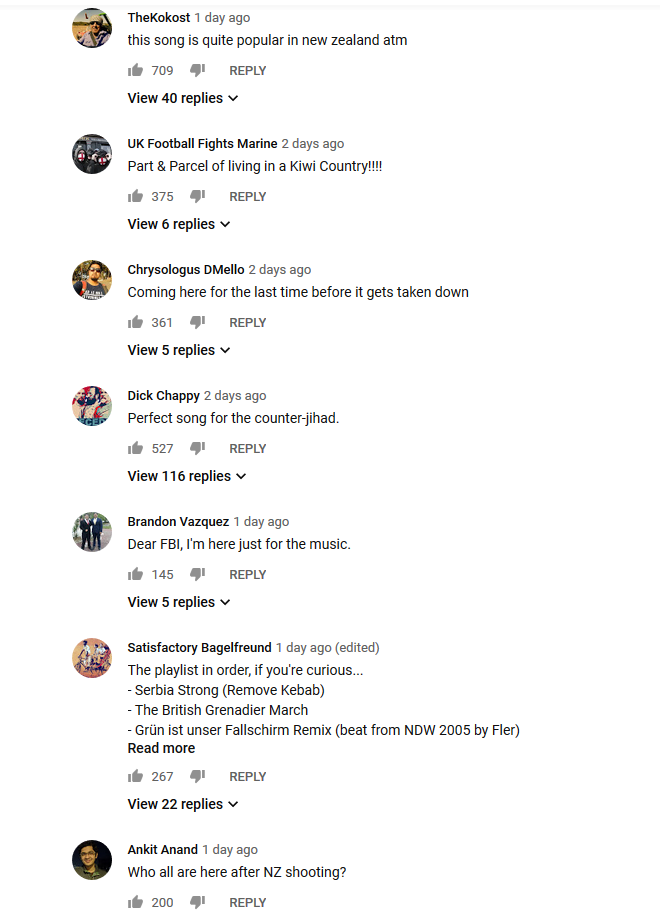 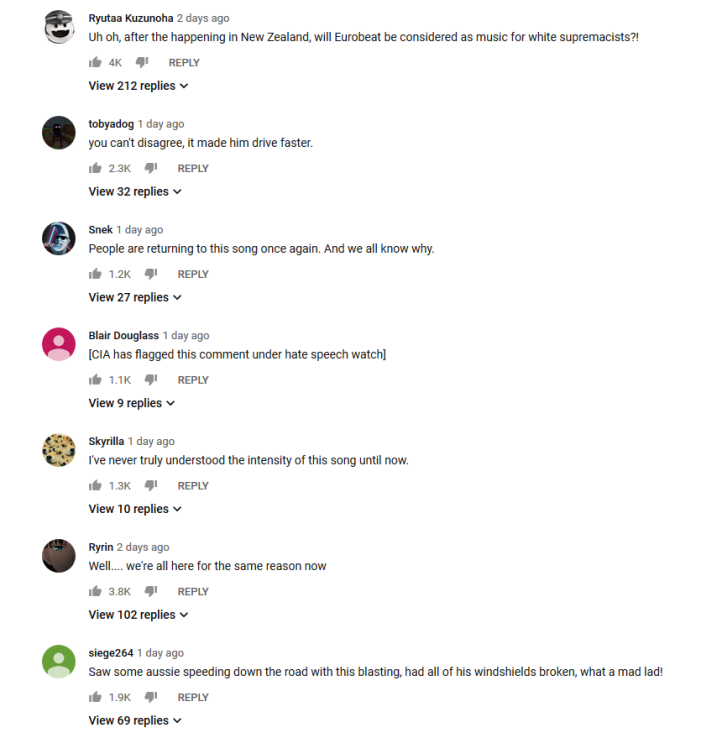 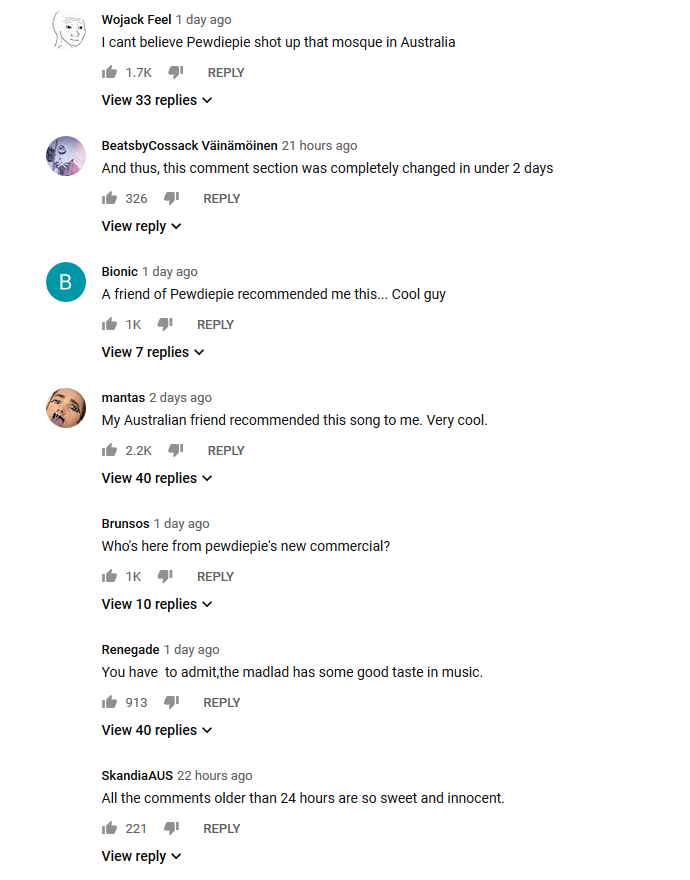 The detachment and cynicism seems to be growing rapidly online. On 4chan and 8chan and across the internet the memes based on these attacks are flowing. This did happen to some extent after Breivik’s acts of terror and others also, but this is on a whole different scale. The New York Times is right for once when they say that this was an attack of the internet and for the internet. Their implication (despite saying that it would be unfair to blame the internet for the attacks) that this means the violence can all be blamed on memes, however, is just complete nonsense. These things don’t happen in a vacuum, you can’t just blame edgy teenagers and then call it a day. But this is of course the typical response from the mainstream media. They want to use terrorist attacks as an excuse to stop people online from saying things that they don’t like and which are dangerous to the powers that be. A free discussion is what they fear most and that is exactly what they want to stop whenever they whine about «online hate speech» and say that we should not be «giving a platform to hate» (they define «hate» as whatever you’re not allowed to say, no matter how true it might be). Despite the fact that silencing people is likely to lead to more violent acts in the future (because it will be far more difficult to affect change through peaceful means when you’re not allowed to speak your mind), this seems to be the preferred response from the media and the rest of the establishment.

Another difference between this attack and Breivik’s is the targets. Breivik deliberately targeted youth politicians of the Norwegian Labour party, while Brenton Tarrant wanted to kill Muslims as retribution for their many attacks in European cities in the last decades. He had «For Rotherham» written on some of his ammunition in reference to the depraved and disgusting acts of grooming gangs in the English city Rotherham. 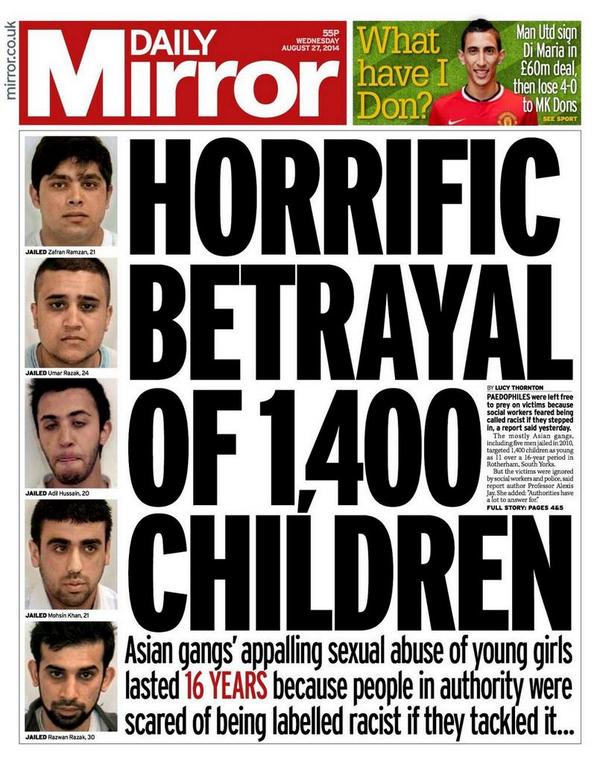 Another specific reference was to the 11 year old Swedish girl Ebba Åkerlund whose name was written on one of his rifles. The girl was killed by a Muslim terrorist in Stockholm in 2017 and her grave has later been desecrated by another immigrant who for some reason has been allowed to stay in Sweden despite this appalling act. A nation that cannot defend its children has no future.

So while the motivations for the attacks were similar, the targets were chosen differently. Breivik wanted to strike at the political party he considered to be most responsible for the mass immigration to Norway, namely the Labour party and their youth wing. Whereas Tarrant directly targeted the Muslim immigrants brought in through the process of mass migration which has happened all over the West. It should also be mentioned that one of the mosques he attacked was not chosen at random. This particular mosque was known for ties to radical Islamic terrorists that fought and were killed in Yemen. This is not a justification for a terror attack, but it provides some context for why this specific mosque was targeted.

Based on comment sections online, it seems that Tarrant’s choice of targets comes across as somewhat more defensible to normal people than did Breivik’s.

Despite the fact that Breivik’s victims were involved in politics, it is hard to justify such an attack when the majority of the people targeted are so young. While most of Tarrant’s victims were innocent, they are also a more direct representation of the people associated with the problems faced by Western countries. Namely crime, economic parasitism and most importantly, ethnic and cultural displacement in our native lands. While normal people don’t want these things to happen – and that includes this author – it could be seen as more justifiable than killing teenagers like Breivik did (there was one child among the victims in the mosque shootings, but this wasn’t the majority of the victims and not what Tarrant deliberately targeted). With all the terror attacks that have happened in Europe in recent years, the sympathy for victims of the shooting among some whites will be less than it otherwise would have been.

Whether you think that’s right or wrong isn’t really the point. I disavow all forms of violence, but what matters is that people will – after years of attacks – become desensitized to death and terror and they will at some point want it to happen to the people perpetrating the majority of these attacks.

And normal people will notice the glaring double standard in how the media covers this attack compared to those committed by Muslims. That’s as inevitable and certain as Diversity + Proximity = Conflict.